Electric cars are slowly taking over the world and that can only mean one thing. We’re about to enter an electric era of motorsport.

Whole championships are springing up for electric vehicles and they’re starting to take over the series where they go toe to toe with traditionally powered vehicles. Soon we might really see the petrol-engined competitors tap out and come over to the green side.

Once internal combustion cars surrender in motorsport,  it can surely be just a matter of time before battery power takes over on the road. So a landmark moment is coming and we can thank these brave pioneers that took a difficult power source and turned it into a winner.

Here are some of the most exciting racecars, bikes and more that are out there right now. It only launched in 2014, but Formula E has swiftly established itself as a major player on the global motorsport scene. It’s getting bigger all the time and is slowly turning into a real challenger for Formula One.

It’s a one-make championship, all the cars are 200kW electric rockets and they race on street circuits in city centers, including Marrakech, Buenos Aires, Hong Kong and New York. Drivers include Nelson Piquet Jr, Jean-Eric Vergne, Loic Duval and more.

It’s a fledgling championship, but big name sponsors include Renault, Jaguar and Mahindra. It is also starting to gain a following and the cars should get faster. Right now they’re good for the 0-60mph dash in 3s and top out at 140mph, which is a long way off Formula One and NASCAR. The cars are getting faster every year, though, so they’ll get there.

On the tight confines of street circuits they still offer spectacular racing. But the cars need to get more dramatic, the sport needs more star drivers and the series needs to keep growing. Pike’s Peak is a legendary annual hillclimb race in Colorado, with purpose-built monsters attacking the 12.42-mile sliver of tarmac that climbs a mountain.

Sometimes cars fall off and Youtube is crammed with spectacular Pikes Peak crash videos. It used to be even more of a challenge as the ‘track’ was a combination of tarmac and loose gravel.

In 2012, the road was completely covered in tarmac, but the Pikes Peak hillclimb is still an iconic event that draws some of the world’s best racing cars and most committed drivers.

Nine-time winner Nobuhiro ‘Monster’ Tajima was the first to switch to all-electric power. It was a landmark moment.

In 2014, the Tajima Rimac E-Runner Concept_One slashed the record and in 2015 it turned up with 1.1 MegaWatts of power, so 1475bhp in old money. It wiped the floor with purpose-built, petrol-powered racing cars with Rhys Millen at the wheel.

It’s hard to see how the petrol-powered cars can respond, we’re in an era of electric dominance. Four-wheel-drive, low down torque to fire the cars out the bends and the fact that the electric cars don’t lose power as the air thins at high altitude means they’re just better suited to the event. We expect more electric entries in 2017. In the French Alps, racers battle it out on tracks carved into the snow and ice. It’s low speed, but the skill is incredible and some of the best drivers in the world come to the Trophee Andros to test their mettle.

Five years ago, the series launched the Electrique division. Unlike the main race, everyone has the same car and it’s a 90kW, 1765lb monster. Now it will only do 100mph flat out and hit 60mph in six seconds. But then these cars dice through bends at 20mph and they only really need the power to slide fully sideways through corners and accelerate hard on the straights.

These silhouette racers have proved popular, it’s entertaining racing to watch and the electric cars have been a valuable addition to the French-based series. 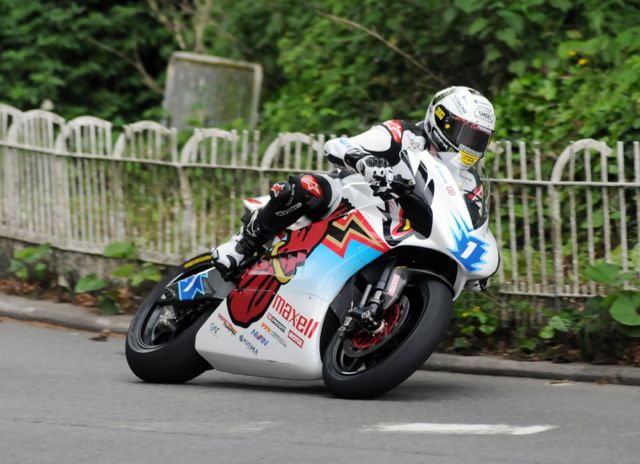 The Isle of Man TT has become a pilgrimage for bikers and it has achieved mythical status as one of the great tests of man and machine.

Once a year, for a week, the island lifts the speed limits and racers graze the walls and curbs of public roads at 200mph. It’s frightening to watch and people die every year, but still they come.

Since 2010, the TT Zero class for electric bikes made its debut and the category has become a hotly contested prize in itself. It is a time trial, rather than a race, and the competitors try to set the fastest time on the 37.7-mile course.

The technology is coming thick and fast and the Isle of Man TT Zero shows just how quickly electric bikes have developed. Mark Miller won the first race with an average speed of 96.82mph.

Bruce Anstey took a new version of the same bike to victory this year. It comes with 120kW (160bhp), so there are faster road bikes out there. But then the IOM TT Zero class has its own regulations to contend with.

Even with a little less power than the likes of the Lightning LS-218. It’s mesmerizing to watch the Isle of Man TT Zero from the rider’s eye view. Here is McGuiness in action last year. Amateur pilots around the world are busy creating ‘artistic’ videos high above their back garden. Drone racing, though, is another league altogether.

ESPN has picked up drone racing and is determined to turn it into a serious spectator sport. Essentially the drones race on marked courses, with drivers taking control of their craft through VR headsets.

The races, on lit courses punctuated with fireworks, end up looking like video games and that makes for good TV.

15-year-old Luke Bannister took the honors at the World Drone Prix in Dubai with his Tornado X-Blades Banni UK entry. He perfected his skills in indoor carparks and the streets.

The Tornado X-Blades Banni UK drone does 0-60mph in just 1.3s with a long enough straight it has a top speed of 115mph. It also has to be lightweight, or it won’t fly, so the 1400mah battery helps keep it to just 700g. Motocross races are short, explosive, relatively low speed and the bikes need low-down torque to power out of bends. Electric power is tailor-made for this now that the batteries are light enough.

The Alta Redshift MX has been eight years in the making and the designers might just have made good on their promise. They didn’t just want to make the best electric bike, they wanted it to be the best bike on the track.

With 36lb/ft of torque and 40bhp on tap, this 251lb bike is full of clever tech. That includes the resin frame that has ribs for reinforcement, like an aircraft fuselage.

It deserves a one-make series and it just has to happen. The Dakar Rally is a much smaller event these days. It used to be a titanic journey from Paris to the heart of Africa, but the 2016 event was an odyssey across Bolivia and into Argentina.

It’s still an incredible test for the bikes, trucks and cars that go off-road and cover vast tracts of land over two weeks. In 2014, the Spanish Acciona team brought the 100% Ecopowered to the party and in 2016 it finished for the first time.

It comes with a 250kW (335bhp) synchronous electric motor that churns out 590 lb/ft of torque. The car features a solar panel on the roof to get a fraction more range, too, and it comes with a Tesla-supplied 150kWh battery pack.

The car will only do 93mph, but then you really don’t need more on this terrain.

Acciona is a renewable energy company that concentrates on solar, thermal and hydroelectric power. So the car is a PR exercise, but it’s also a fantastic demonstration of electric power at work. If it can handle this kind of adventure, it can get you to work every day.

Of course electric cars are heading to the next level, with autonomous technology. Now we have a race series with no drivers.

Roborace will support Formula E this year and the futuristic cars with duke it out with the help of algorithms created by software engineers.

There’s some pretty intense science going on, but Roborace hopes it will help advance autonomous driving technology and bring in the big name manufacturers as sponsors.

Eventually the cars will do 190mph, although we don’t expect them to go full speed at the first meeting. For now, just revel in the cutting edge look that comes from the mind of automotive futurist and conceptual artist Daniel Simon and think about these cars going to war without the human survival instinct forcing them out of a late braking move.

It’s an intriguing prospect. It could be epic, it could be horrible and the cars could just finish in a mangled mess at the first corner.

We just don’t know, which is why we’re anxiously awaiting Roborace. Massive acceleration and supreme straight line speed are pretty much all drag racers care about. Weight doesn’t really come into the equation, except when it slows them down.

Electric power, then, could be the answer they’ve been looking for. It was for Lawless Electric, which produced a drag racing bike that beat the 200mph mark all the way back in 2012.

As battery technology has come on in leaps and bounds in the last four years, this is a record that is surely ripe for the taking. Every year students from around the world go to war with electric cars they designed themselves in the Formula Student event.

This is a serious competition and a team of 30 students from ETH Zurich and the Lucerne University of Applied Sciences and Arts have created a car that hits 60mph in just 1.513s. It took just 30m of track to get there.

Grimsel was the team’s fifth entry and it’s a four-wheel-drive machine that uses an electric motor for each wheel and produces 150kW (200bhp). Peak horsepower isn’t really the issue, though, the Formula Student event is all about acceleration and the torque figure is what really matters. That is a totally disproportionate 1254lb/ft.

The car weighs just 370lb thanks to extensive use of carbon fiber and other lightweight materials. It’s also tiny, so it doesn’t really have any real world application. But it is a stunning car and it shows just what electric power is capable of.

What’s your favorite electric motorsport competition on our list?