It’s always fun to see a stunt drone take to the sky. There are many styles of stunts to behold, but from a retail sense, you should expect a machine that flips in the air. Sometimes they call it 360 aversion, or you might consider it a barrel roll, no matter, it’s a stunt and it’s fun to see.

There are other tricks that drones can perform these days, we’ll leave the technical merit of each up to you. For now, these are some great drones that perform some sort of aerial maneuver to bewilder an audience, the best stunt drones.

Things you need to know before you fly!

The DJI FPV is not really a stunt drone, no more so than any racing drone, but the capabilities of this hybrid camera-racing drone make it a fantastic choice for high-speed pilots. Paired with the FPV Goggles V2.0, flips and other stunts will feel crazy, but even just flying around will be great fun. Work through the flight modes to learn how to fly a racing drone. 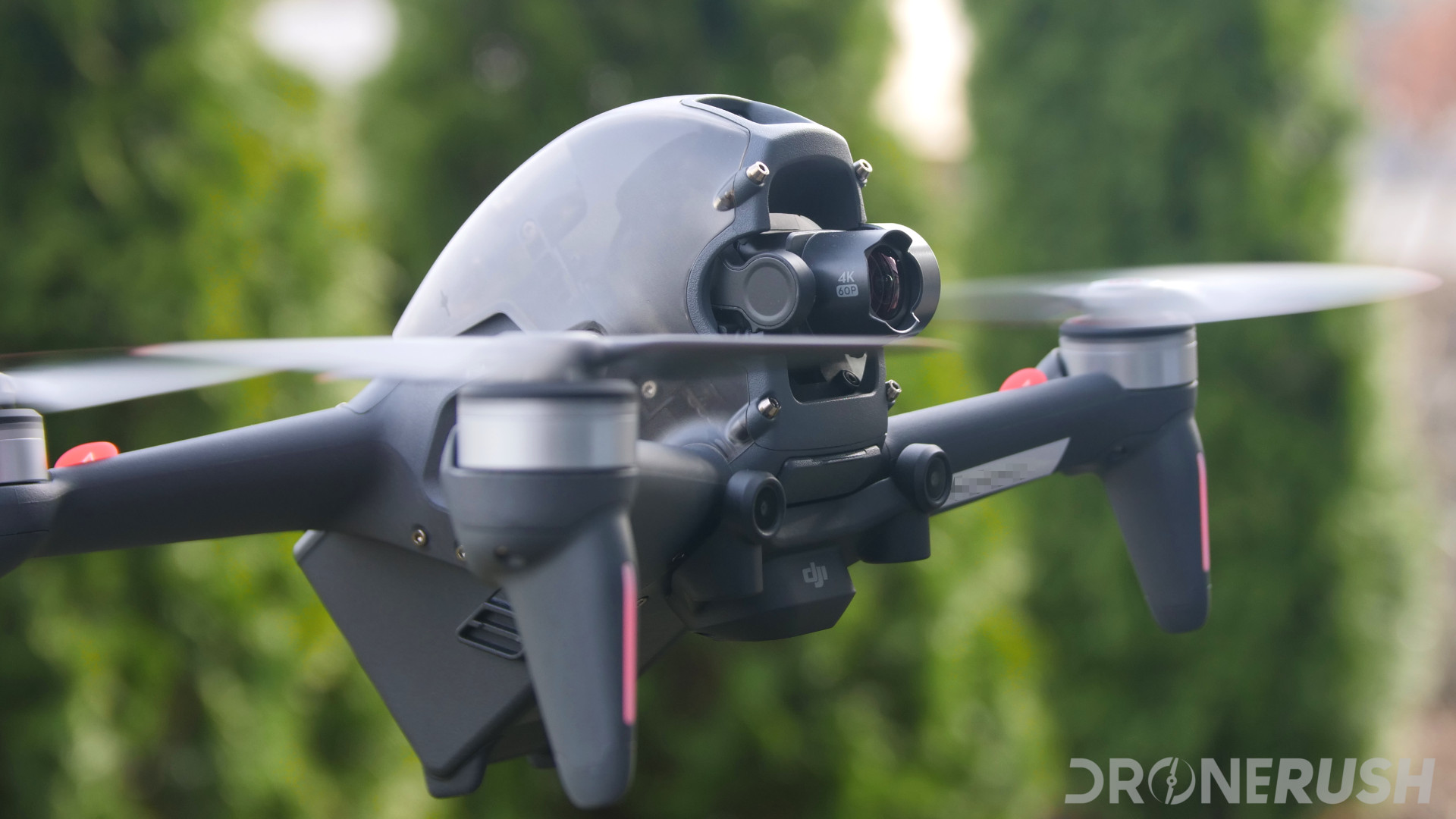 The DJI FPV is a fantastic hybrid drone. It takes the very best from both the racing drone scene and the camera drone experience, making for one of the most exciting flying machines around. Blending the two has compromises, including shorter flight times than camera drone pilots would like, and agility that may not keep up on a tougher race track.

The Eachine Paraglider is a fun little toy. Equipped with an action hero, put your little army man to work using this aircraft as either a paraglider or as a hoverboard. Please do not expect much from this machine, it’s a low-power toy that looks cooler than it flies, but a ten-year-old me would have loved to give this paraglider a go. 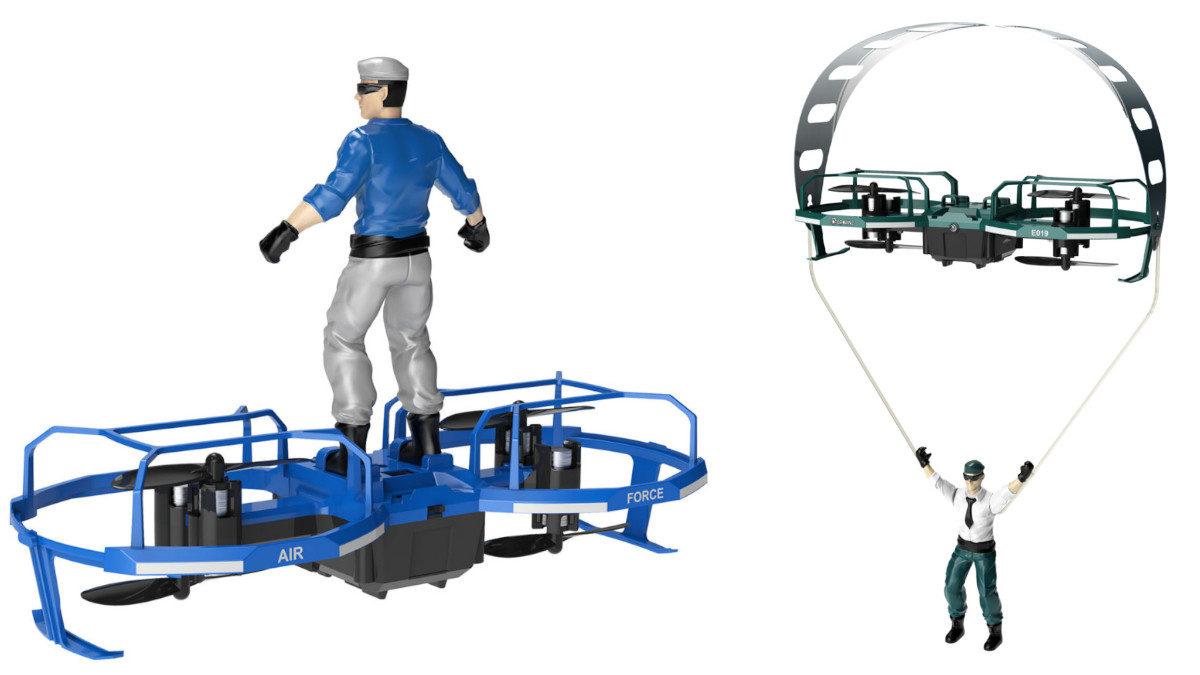 A fun stunt drone from one of the top toy drone manufacturers around, the Eachine E019 Paraglider offers a few different flight modes, all great fun.

The dream of extended boomerang flight is made possible with the Air Hogs 360 Hoverblade. This small foam toy is safe for most children, and offers plenty of battery life for those sunny afternoons in the park. This simple three-blade boomerang has just one little motor and propeller that drive the rotation of the boomerang itself, relying on the body of the craft to create lift. 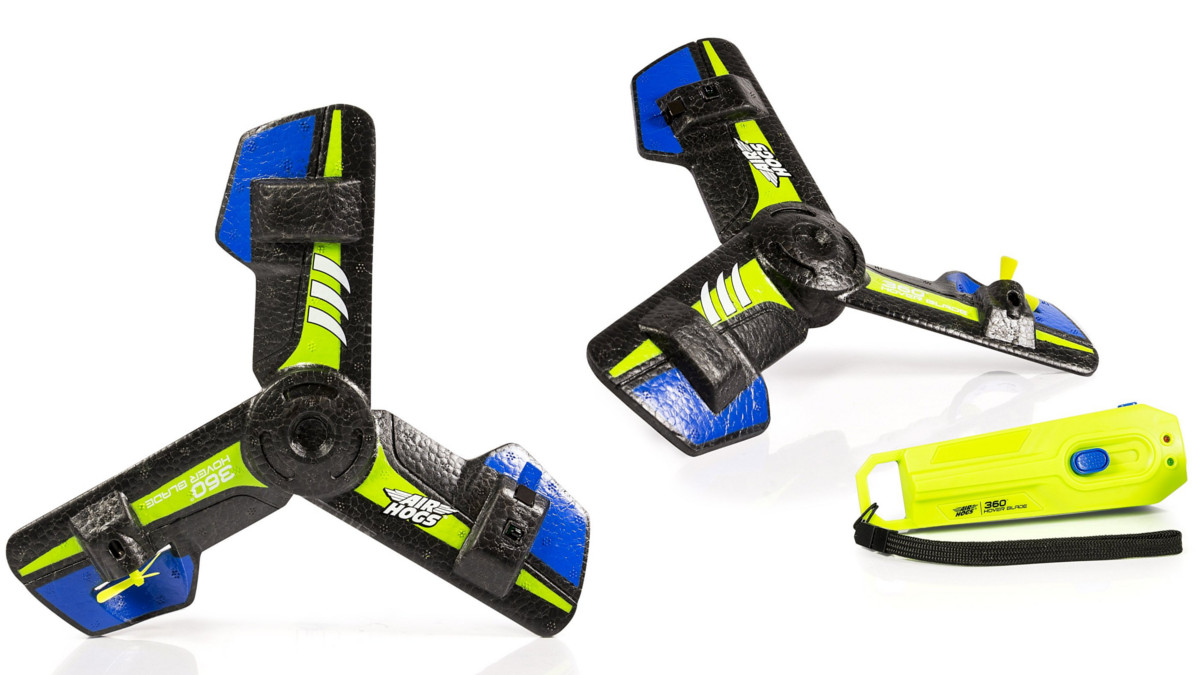 Not your typical drone, the Air Hogs 360 Hoverblade is a self-propelled boomerang. Throw it, launch it, modulate the throttle and enjoy the fun.

The DJI Mavic Air is an older DJI drone at this point, but it launched with an extended feature initial launched with the Spark, hand gesture controls. Many drones offer the ability to trigger a photo capture, but you could entirely take-off, navigate, and land the Mavic Air with your Jedi mind tricks! Plus, the Mavic Air was one of the best consumer-class camera drones on the market at launch. 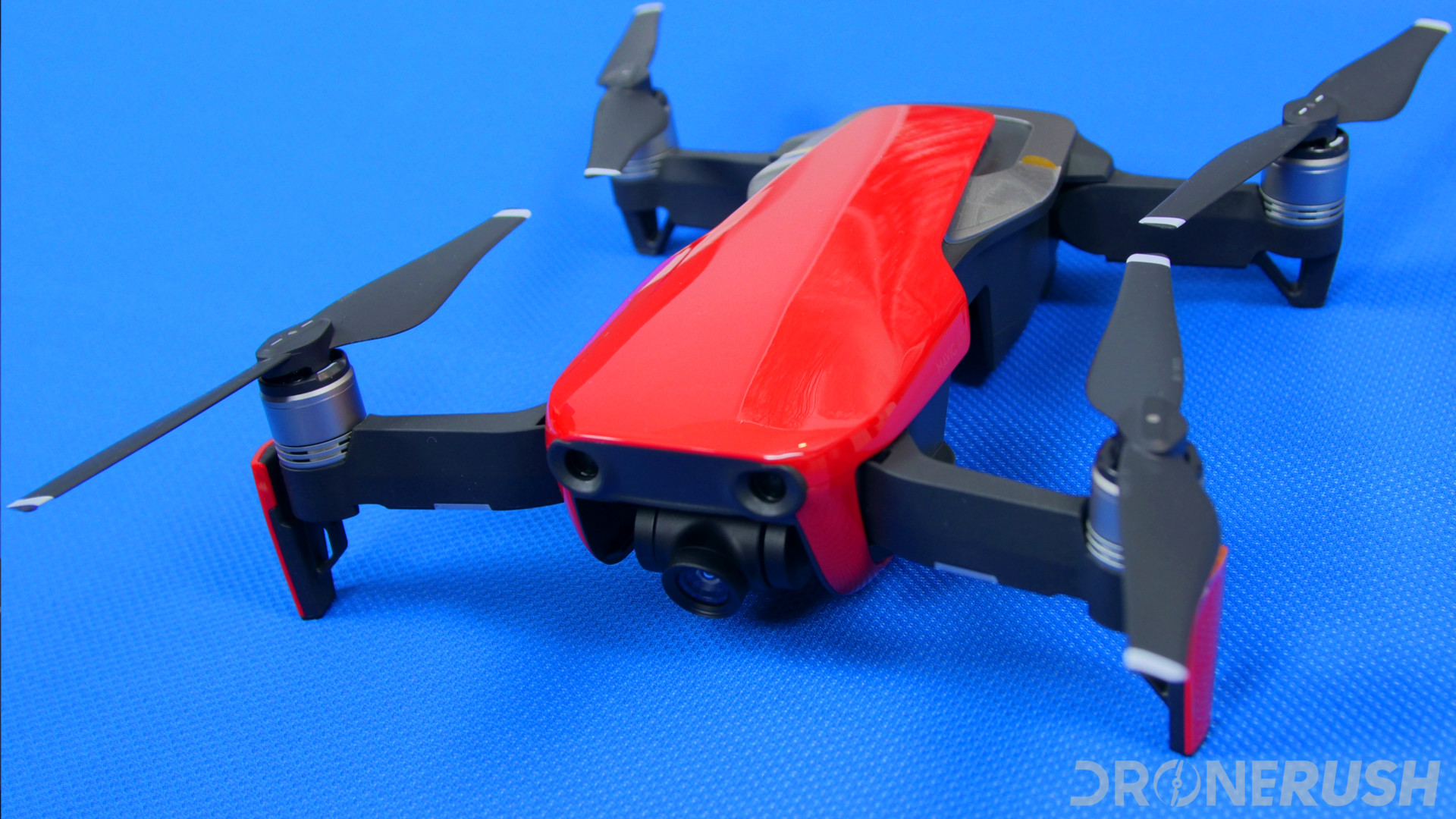 The DJI Mavic Air is a superb starter drone for those that want to put a 4K camera into the sky. As one of the first drones under $1000 to offer not only 4K video capture, but also a very well stabilized 3-axis gimbal and a video data rate of 100Mbps, the Mavic Air was one of the best drones on the market for a long time. Fast, affordable, and with a rich set of flight features, the Mavic Air is both fun to fly, and easy to travel with for a great camera-in-the-sky experience. 2019 update: While the Mavic Air is currently still one of the best 4K camera drones under $1000, we can't help but recommend either the Mavic Mini or larger Mavic 2 series drones instead. At least until a Mavic Air 2 comes out.

The Yuneec Mantis G is a decent little camera drone, with a fun trick, voice controls. Speak commands into the remote and it translates those into flight controls. Enjoy your entire flight via spoken word. 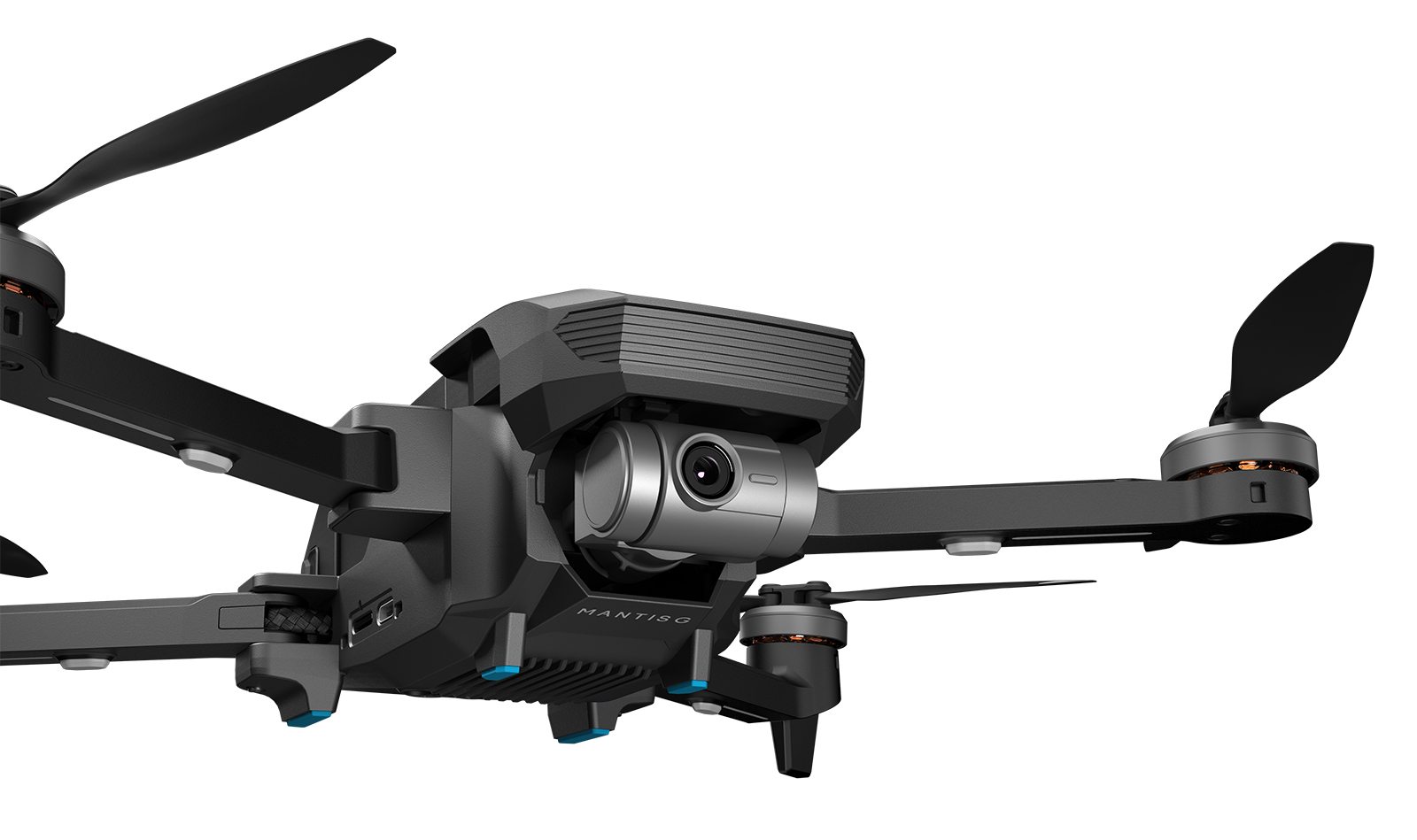 The Yuneec Mantis G adds a stabilized camera Gimbal to the Mantis Q – exactly the missing piece from the original folding drone. Now you can shoot smooth 4K video. Launching in October 2019.

The Skydio 2 is likely the very best follow-me drone on the market today. This machine has powerful processing and multi-direction sensors to both sense and avoid obstacles as well as track an object. Skydio prides themselves on making this drone as hands-free as possible, which is a stunt all on its own. 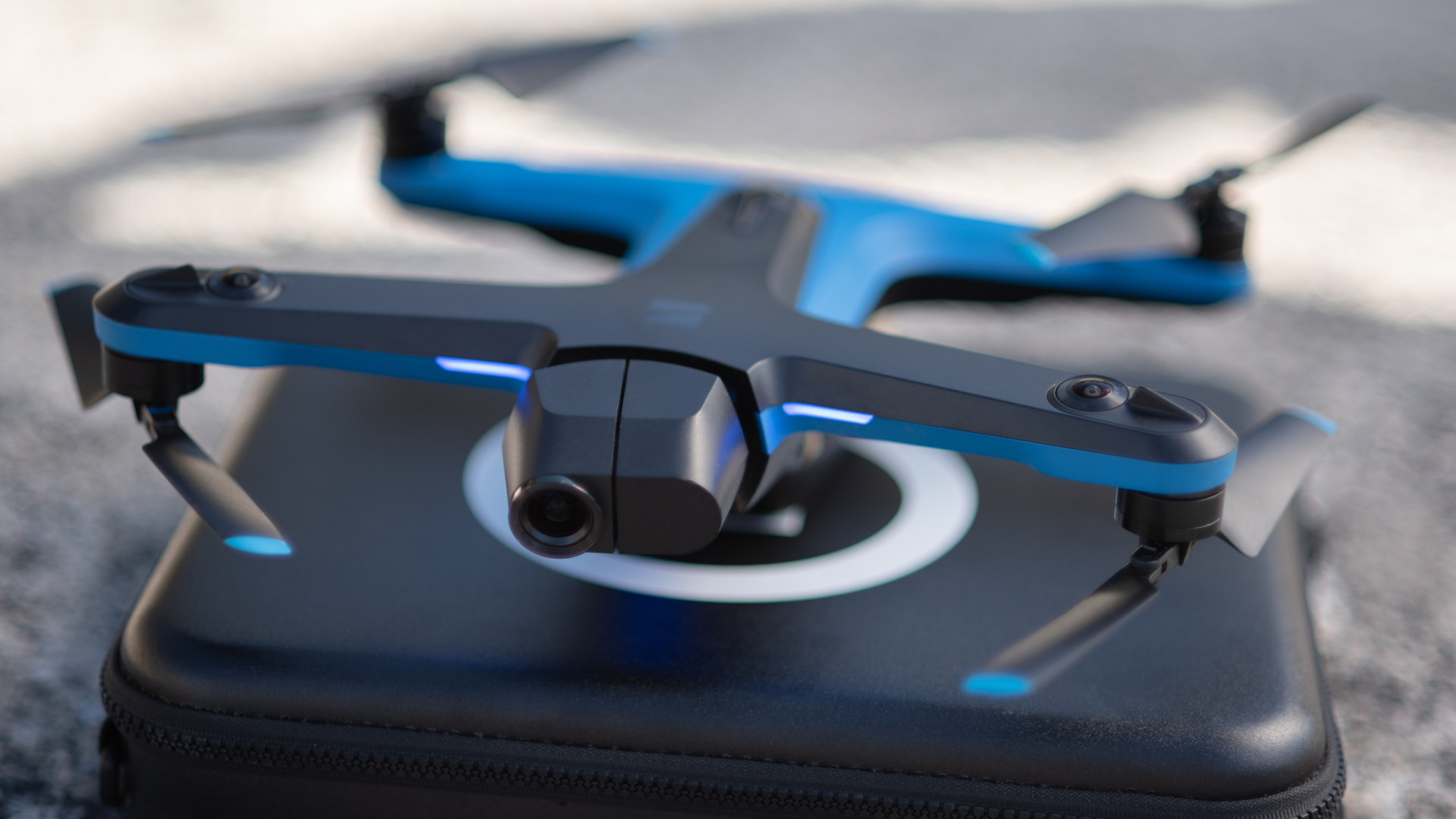 The Skydio 2 is a consumer drone with the power of a commercial drone. An array of sensors and a powerful on-board computer make for safe and autonomous flight.

The UVify IFO is a safe and capable drone that does little more than haul a big RGB light into the sky by default. While the drone is capable of much more, including being a leader in AI flights, turning a few dozen of these into a drone light show is the value for our purposes today. UVify can help you with any size of fleet you need, to put on any size of show you desire! 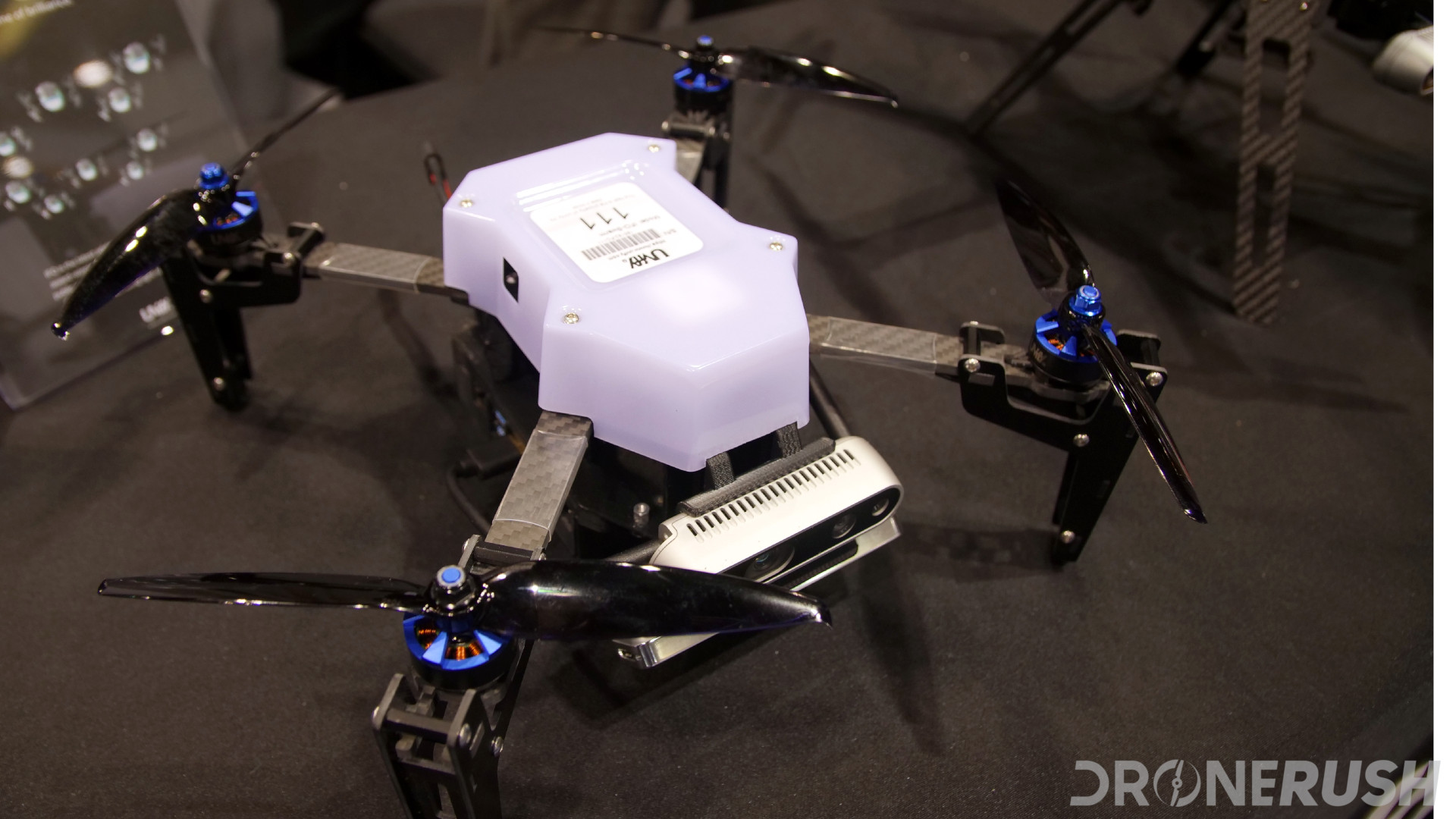 Building on the original IFO, the newer UVify IFO-S puts powerful computing and robust payloads on the same platform. Swarm drones for search & rescue and more.

Related: The DJI Robomaster TT is a toy-class machine that can do small swarm light shows.

I hope we do not have to say this, but please be safe out there. A toy class drone performing a flip in your backyard will be just fine, perform that flip over your siblings’ head in the living room, maybe not as safe. Please note that we are intentionally omitting one of the most exciting ‘stunts’ you can perform with a drone, the high speed pass. I won’t pretend that a big drone flying quickly isn’t a rush, but a big drone flying quickly is an easy recipe for trouble.

What really matters, please work with me folks, it is still early days for drones in in terms of laws, which are still being developed to control and even hinder our flights. If we make a habit and culture of flying safe, like manned aircraft strive for, chances are we’ll see fewer restrictions on future flights. Legislation aside, stunts can be dangerous, I have seen propellers break skin and require stitches, please do not experience the same.

I don’t know how you feel about flying drones, or your skill level, but I pose to you that successfully navigating a race course with a high-speed drone is a stunt. I know my practice to create ultra-smooth and slow-moving flight for video capture makes me a poor race pilot. I applaud anyone that can rock the high-speed flying around highly technical courses, and if you are looking to give it a go, time to grab a racing drone.

See what we mean:

When it comes to stunt drones, there are really only a few on the market that focus their efforts on some basic maneuvers. The rest is now up to you. Get out there with a flying machine, something agile and easily repairable, and create some new techniques. In this regard, most any drone that doesn’t fly itself can be the best stunt drone for you.

What are drone stunts?

Primarily, we refer to flips, spins and similar aerial maneuvers when we talk about stunt drones. Most modern drones have advanced electronics that work very hard to keep a drone perfectly upright, so the task of flipping a drone upside down is more difficult than it sounds. There is very little benefit to stunts when you talk about camera drones, but the racing community can tell you that the crazier you can fly, whilst still being in control, the better you’ll do on the race track.

How fast are stunt drones?

Getting a drone up to some crazy speeds is fun, but most stunts are going to be managed at lower speeds. It is no problem for a racing drone to clock up to 100 mph, but when you are going nearly 150 feet per second and your race track is only 100 feet long, with the next turn just 20 feet away, you’d have to be robotic-levels of good to manage that. For free-styling on the race track, you’ll be bouncing between about 20 – 40 mph.

Can I put a GoPro on a stunt drone?

The payload capabilities of every drone are different. If you are talking about the average racing drone, then yes, you’ll probably be able to attach a GoPro. The team at UVify like to attach action cameras to their Draco drones, then go flying in the forest and such. They made a series of fun videos, but you’ll notice that they take the big cameras off when they go to a real race – let’s be fair, a GoPro is almost as heavy as some of the smaller racing drones out there.

Can I put on a drone light show?

As far as the technology goes, there are solutions you can buy, lease, and build that are able to fly and choreograph multiple drones at the same time. The technology is not the obstacle, the laws are. The FAA, like many airspace authorities around the globe, mandate that there be one pilot per drone. Commercial operators that can prove their safety case may apply for waivers to bypass this rule, you’ll just need to be prepared to legally block off your flight area, including a decent buffer around it, prove your drones are safe and able to operate as required, and that your flight would not otherwise violate other ground or airspace rules.

What do I do when Remote ID is a requirement?

Assuming your drone does not already meet the requirements of the Remote ID broadcast requirements, you will need to explore an add-on module to handle the task. It may be that the FAA will offer waivers for fleets of light show drones, or allow you to set up a temporary FRIA for your operation. Until the FAA guarantee that this is possible, you should prepare to have to equip all of your drones, yes, even if you are Intel and have a few thousand drones to work with.