Intel had a large presence at InterDrone 2017, indeed, CEO Brian M. Krzanich joined the Administrator of the FAA as a speaker for the opening keynote. With commercial drones mainly in their lineup, we took time to chat with Natalie Cheung, General Manager of Drone Light Shows in the UAV Group, about the Shooting Star drone.

First, let me say that I was impressed with the new drone. I held the first generation Shooting Star earlier this year, it was good, but this second generation is so much better. On that note, let’s dive into the drone and the whole premise of the Drone Light Shows project from Intel. The newest Shooting Star drone follows closely in the design of the original quadcopter. It is now smaller, lighter and brighter. This time out, the drone is made of more plastic than foam, the body is much shorter and what I found interesting is that the dome light on the underbelly was also much smaller.

The premise remains the same otherwise, a mid-sized drone with a smiley face on it, big propeller guards and the ability to fly with hundreds of its friends to light up the night sky. Perhaps one day Intel will consider selling the Shooting Star drone to the public. It is, in my opinion, a wonderful beginner’s drone. Easy to fly, light-weight, very safe and no camera, just a big LED lit dome. Perhaps that would encourage night flights, which isn’t good, but otherwise it packs the right punch for a pilot prone to crash.

The dome light is a four color setup, able to take on whatever color you desire. Perfect for painting pictures in the sky. Behind the scenes are a few powerful computers to keep everything operating. Two people can manage piloting an entire light show. That said, it takes dozens of people on the ground handling actual deployment, swapping batteries and firing up new drones when any fail mid-show.

We constantly hear the number 500 when we hear about the Shooting Star drones. That is the current flight record Intel set a while back. But why 500? No reason, really. Natalie informed me that this number, as with the majority of the idea of this project, were just people joking around.

Joking about putting a few drones into the sky has led to amazing things. 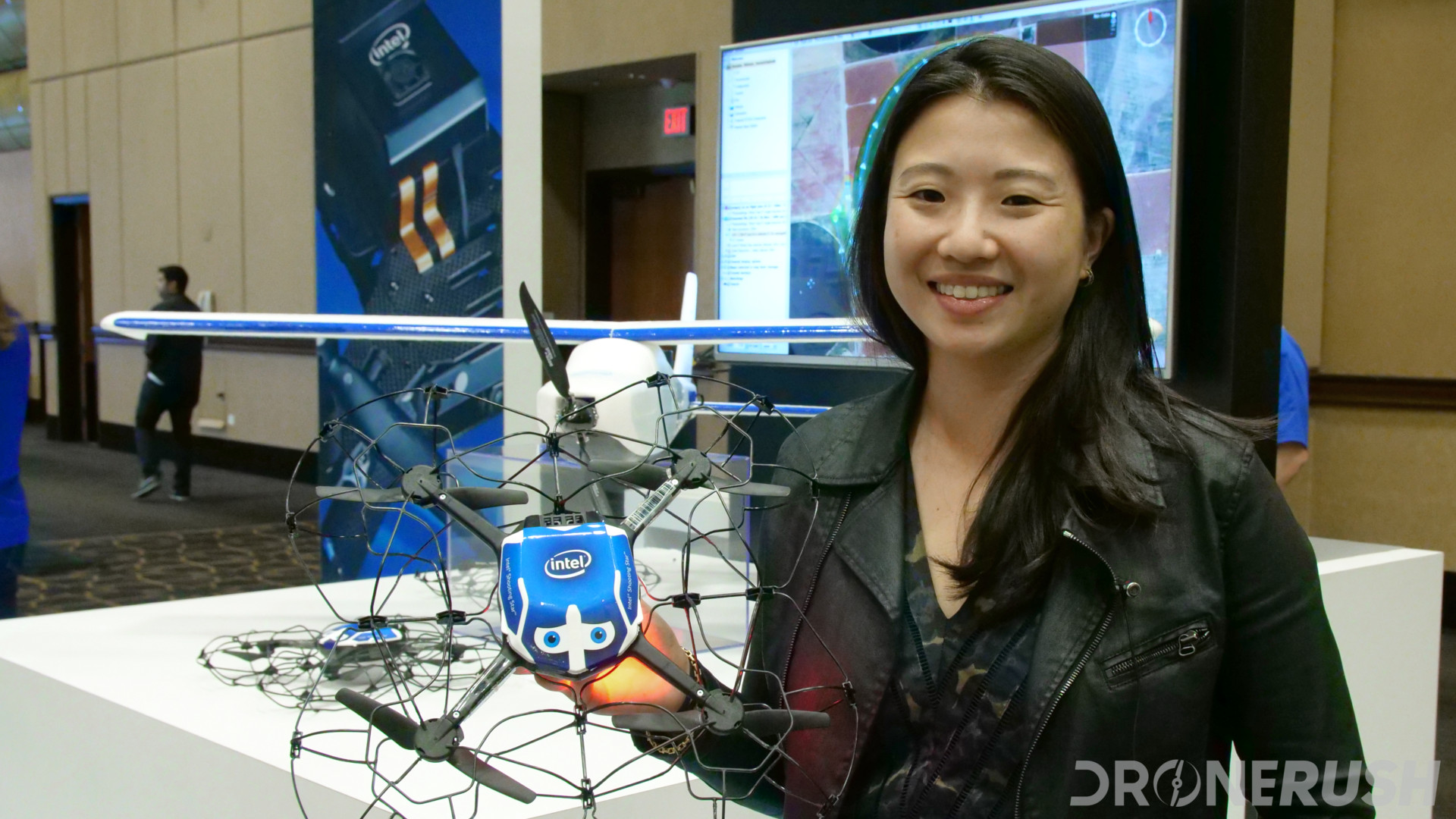 The systems are designed to handle nearly an unlimited number of drones. The FAA says we at home can’t fly any more than one at a time. Intel says that having a dozen drones in the air simultaneously, instead of one, will save lives if deployed on a search & rescue mission, for example.

We imagine further missions where this could save lives or assist in daily chores. Maybe not daily, but, why not? When is the last time you drove down the road at night and were blinded by oncoming headlights? What if you had a few drones keeping a constant light overhead. This could improve visibility for drivers in both directions.

That was an extreme example, and something that is not in the pipeline as we speak. Natalie made it pretty clear, the goal at this point for her division is to continue to entertain the world. Perhaps the danger of fireworks can be replaced by a few buzzing quadcopters in dry conditions. Perhaps your next school dance or work BBQ can simply enjoy a little light show.

If you are a drone enthusiast, more importantly, if you have any plans to keep tabs on the commercial and professional markets of the drone industry, I highly recommend keeping an eye on Intel. With the launch of the new Insight software, Intel is combining data captured by drone with AI and “big data” to provide enhanced drone services. Their systems can on do it all, from flying the drone all the way through to using the captured photos and video to create a 3D map of a building and automatically inspect it for damage or other obvious defect.

Shooting Star and the light show program are a fun way for Intel to help grow the enthusiasm for the drone market. As they grow their abilities and expand their operational bounds, the Shooting Star program really is poised to offer entertainment services, if nothing else, to many around the globe. Learning from this program, then putting the flight control tools to other uses, the Shooting Star drone is one small piece in what could one day be fleets of drones in our skies. Delivering your mail, providing light in darkness, even basic home security systems could be on the horizon. Before then, we expect to see search and rescue and other emergency services put the systems to use.

Next up, of course, is increasing the battery life from ten or fifteen minutes up to an hour or more. Of course, the entire drone market faces that obstacle. Perhaps having a handful of drones to swap between is easier than having a handful of batteries for extended flight operations.

If you could, would you buy a Shooting Star drone? How much would you pay for the drone, then how much for the systems to fly?