What’s inside your drone? For many, it is a purpose built AI supercomputer from NVIDIA, the Jetson. An example of a drone putting this supercomputer to work, the Redtail drone from NVIDIA – an autonomous machine blazing trails wherever it goes.

At InterDrone 2017, we had the chance to sit with Deepu Talla, VP & GM of Intelligent Machines for NVIDIA. Mr. Talla explained NVIDIA’s efforts in the drone space, and while a consumer UAV is not in their playbook, putting AI into any drone out there certainly is.

I doubt I have to sell you on the value of AI in our modern world. We use it in the search engines, social media sites and more that we use every day. As drone pilots, AI comes into play for autonomous flight, if nothing else.

NVIDIA is not the only player that understands that the intelligence behind a flight is important, but they are one of few that are building a computing module in the form of a super computer that fits in the palm of your hand. The Jetson TX2 is higher performance than 2 core i7 PCs combined but at much lower power and roughly the size of a credit card. All the necessary parts are embedded, all you have to do is hook up power and I/O devices, like a monitor and keyboard.

The purpose of Jetson is to provide a lightweight computing module powerful enough to perform AI functions on device. That is, there are drawbacks to requiring user input to travel to a server, process the data and then fire back an answer. This becomes crucially important on a drone, especially if you fly where there is no network connection to talk to said server. 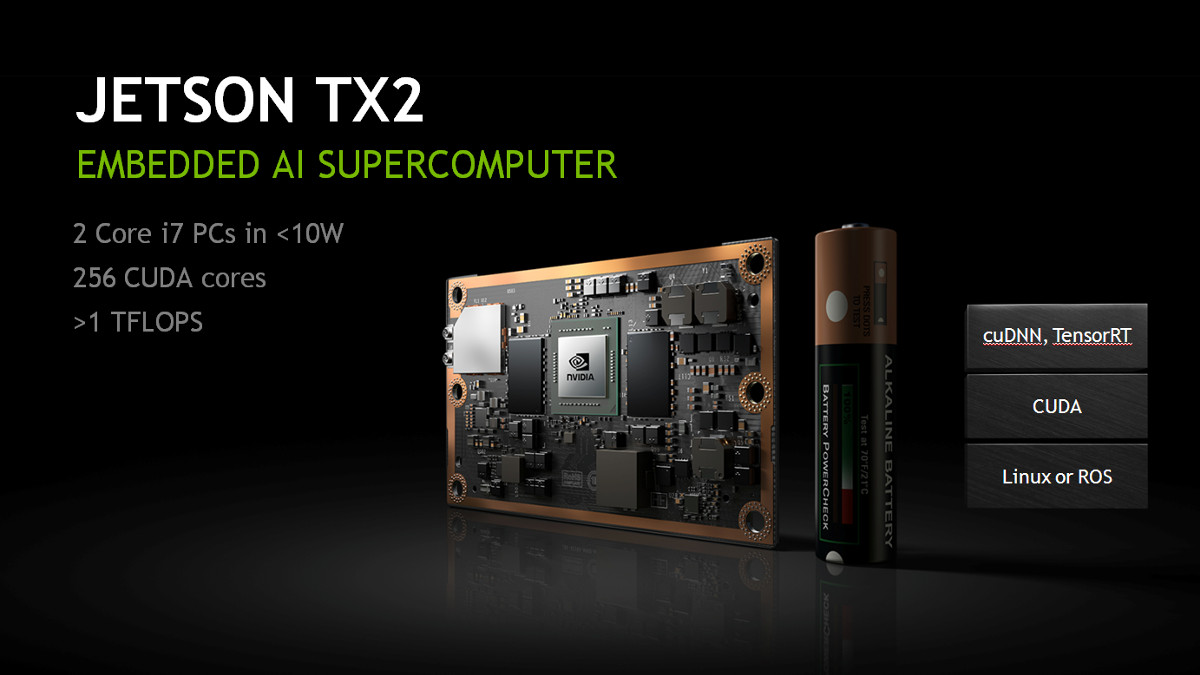 Drone navigation, as a main starting point for NVIDIA’s AI efforts, certainly cannot wait for a server to process the data. The drone needs to be able to identify obstacles and calculate a path of flight almost instantly, which is what Jetson provides.

NVIDIA has been testing the systems themselves with the Redtail drone.

Remember when I said this drone was blazing trails? I meant that literally. The test flights and navigational purpose at this time has been on hiking trails. Requiring no pilot input, no GPS and no maps, deep learning tools in AI navigate the drone down a path. The drone must identify obstacles and distinguish the trail from its surroundings across various terrain. So far, so good, they tell me. The Jetpack API for the Jetson, along with the open source TrailNet software, allow you to build the same drone system at home.

Many see NVIDIA’s autonomy as a subtle difference from the advanced follow-me and self-piloting modes of many drones out there today. We admit the results in the air are near the same at this stage of the game. However, consider that many consumer drones are currently near maxed out their capabilities, the NVIDIA systems are just getting started.

My DJI Mavic Pro can navigate itself from Point A to Point B in the air, if I tell it to do so. However, it’ll never be able to decide for itself to hike a mountain path, then report back to me when it finds evidence of a lost hiker in a search & rescue operation. This is the difference between true autonomy and some self-piloting capabilities.

This is not to say that DJI’s autonomy must compete with NVIDIA’s, actually, we can’t wait to see them stacked. DJI can fly a drone quite well, NVIDIA can add the next level of smarts while flying. That’s an exciting future for drones in my books!

The Jetson supercomputer is not something you can just grab off the shelf today, but group purchases for educational institutions, for example, can be had. Also, if you are a developer, NVIDIA has a reduced price developer kit available for $199.

We are fans of the high-end NVIDIA GPUs in our computers at home, now we can be excited for those same GPUs powering AI in our drones or other robotics applications.