You know you need propellers to fly your drone, but just how many do you really need? Most modern drones are quadcopters, which means they have four propellers, why is that?

Join us for a short exploration on drone propellers, specifically, let’s look at how many you need to fly.

No matter how many propellers you have, we recommend inspecting them before every flight. If you identify any cracks or chips, it is best to retire those propellers and install new ones. It may have occurred to you that a drone could fly with a single propeller, that’s how helicopters work after all. That would be incorrect. The tail of a helicopter is equipped with a sideways mounted propeller. It does not provide lift, but it is required to prevent a crash. That makes two propellers, sorry.

In the same way, a drone needs a minimum of two propellers to safely take to the skies. Unless, of course, alternative measures are taken to mimick a tail prop. Today we will ignore that topic except for one simple idea:

I imagine you could use a cone shaped air inlet mounted below the single top propeller, slightly angled forward to capture more air when on the fly. That air could shoot down a tube and utilize an articulating nozzle at the end to mimic a tail prop. I doubt it would work, but that’s my approach to a true one-prop drone.

Stay tuned for a future Science of Flight article where we’ll cover the various propeller configurations out there. The science behind your flight is simple, spinning a prop applies an equal force in the opposite direction. Each propeller motor, if left unchecked, will try to spin your drone just as fast as it spins the propeller blades.

The solution is simple, apply an equal force in the opposite direction. Propeller 1 spins clockwise (often abbreviated to cw) while propeller 2 spins counter clockwise (ccw.) Prop 2 on that helicopter directly provides thrust to counteract the spin.

Now that balance is achieved to prevent spinning, we know that a drone needs a minimum of two propellers to fly. So why aren’t there any two prop drones out there?

Preventing the craft from spinning is only one part of stable flight, ensuring the thrust from those props is applied in the proper direction is the next.

Two opposite facing propellers can prevent each other from tilting out of control along the plane on which they are attached. Bare with me, I don’t know the proper scientific terms here.

By attaching two propellers to a craft, the center of lift becomes a straight line. Think of a pencil on a desk, if you try to tip it over end to end, it just sits there and laughs at you, but if you try to tip it over sideways, it rolls off the table. If your center of gravity of the craft is not within the line of the center of lift of the propellers, your drone will take off sideways as it is tipped over from the weight.

Two propellers can fly, but without articulating motors and/or a precisely balanced load, you have little control over flight. Plus, without getting into it yet, you won’t be able to steer.

There are two main exceptions to this, a helicopter and a gyroscopic helicopter design. Two centered propellers, one on top of the other, spinning opposite directions can make a craft fly without spinning. Your craft must just hang underneath, but up it will go without spinning out of control. The down side, it’s really hard to maneuver these machines without an advanced system. Turning is easy, but going forward or backward is not. I know I skipped three, we need to establish some stuff first, and the standard four propeller, quadcopter design can do that for us.

Just like a car having four tires, having four points of thrust and balance is the most economical way to produce a drone. This allows you to balance the craft in several ways. First, an even number of props spinning cw and ccw to prevent the craft from spinning.

Second, you have four points that offer variable thrust, enabling the craft to maintain position in the air and a relatively stable hover. Third, the pairs of propellers act as resistance to each other, when the front props try to go right, the rear props go left and the craft spins – this time it is done in a controlled manner, thus, you can steer your drone.

Maneuverability is controlled by spinning the trailing propellers faster than the leading ones. This tilts the craft, transferring some of the upward thrust laterally. You’ve seen a quadcopter tilt around, I’m sure. Even at a hover there is tilting taking place in order to combat wind and other factors trying to throw your drone off course. Even a basic toy drone does this, constantly making adjustments to the speeds of the propellers to maintain at least a level craft. It is possible to fly with three propellers. Thing is, you must approach the design almost as if this is a helicopter. Each of the props can provide lift, unlike a traditional helicopter, but one of the props must counteract spin.

In the case of the Atlas Pro that we put hands on at InterDrone, the rear propeller motor assembly articulates side to side. This handles balancing flight and the majority of thrust for steering. As I hope you have the grasp of now, the key to drone flight is balance. You should always have as many cw props as ccw props and they should pair off to help prevent the drone from spinning. The center of gravity of your drone should, ideally, be located perfectly in the center between propellers.

As long as you respect the balance and pairing, you can have as many propellers as you can fit. That said, you can have too many, creating inefficient airflow. But inefficiency shouldn’t prevent flight, just reduce your lifting power and flight time.

Also note, if your center of gravity is not at the center of lift from the propellers, the props on the heavier side will have to work harder. Motor burnout is the concern.

What if something goes wrong? What happens when a propeller, or motor, experiences a failure? Simple enough, the remaining propellers take over. At least they try.

With our single propeller idea, one prop fail means certain doom. With two props, I can pretend there’s hope, but prepare to meet the ground.

Three propellers as well means all but a crash. With a failure, your craft turns into a two prop machine, and I highly doubt the center of gravity of your drone is where it needs to be for two props to keep the balance. Your drone should shoot off sideways on you. Sorry. 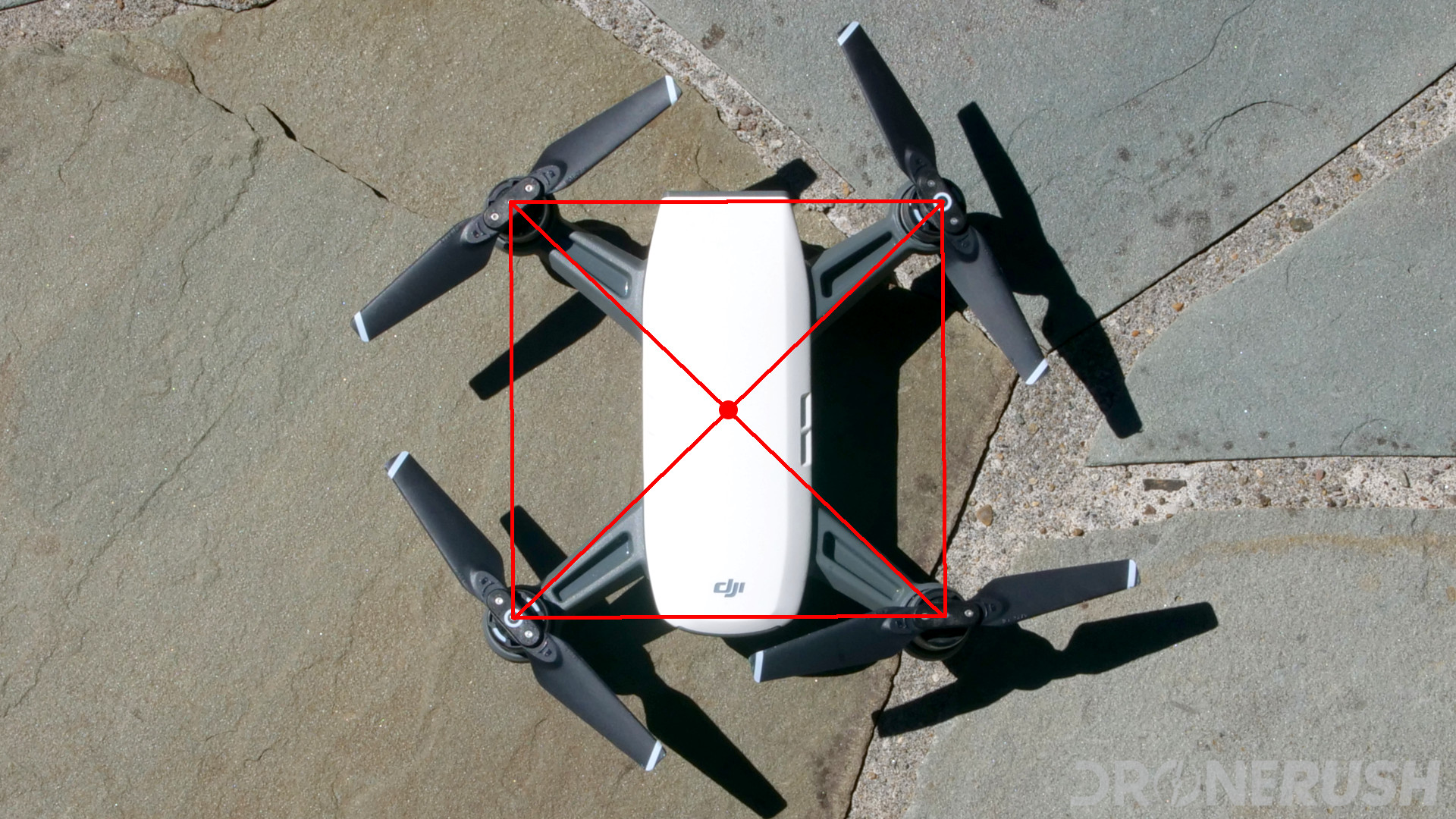 Quadcopters are a unique consideration. Crashing or landing depends on the center of gravity and center of thrust, obviously.

Your machine is likely to track off sideways, but perhaps not tip and take off like a three prop machine would. With four propellers, your acceptable load area is anywhere within the box created between the props. With a failure, that box becomes a triangle, and if your center of gravity sits within that triangle, it is possible for the craft to continue to fly. Of course, a perfectly balanced drone will now have the center of gravity right on the very edge of the triangle, just hope there’s no wind.

With this loss, you have the two opposite operational propellers providing most of the lift, and the non-paired operational propeller trying to keep the balance. If it spins, the missing prop on the other side is not there to balance, and things will go bad. It will likely spin down, almost to a stop.

In all reality, your best expectations for a prop failure in a quadcopter should be for a controlled crash. The likelihood of your average machine continuing to fly is low, but you should be able to keep it from dropping and probably keep it from taking off into the bushes.

Now we get into the fun stuff, hexacopters, octocopters and bigger. You’ve likely figured out the pattern. When a propeller fails the center of thrust changes, if the center of gravity remains within the thrust area, your machine will not drop like a rock.

Balance is also of concern. As long as the twisting force of a lost prop can be compensated for by the other props, your machine will remain in control. To that end, a hexacopter can easily lose one propeller and continue to fly. Quite well, actually, as it is basically a quadcopter with a little imbalance at that point.

If two props fail on a hexacopter, as long as they are not side by side or of the same cw/ccw orientation, things should remain safe. If you are down to three cw props and only one ccw prop, that one ccw motor will be working overtime, land before it burns out. That single motor also may not be able to keep up, your craft may go into a spin. Otherwise, two opposing cw/ccw prop failures means you’ve got a quadcopter now. Good to go!

Three props failing gets tricky, but the rules still apply, as long as you still have one pair of opposing propellers and the third managing to keep balance, you’re good. Lose three side-by-side or all three of the same orientation and you’re toast.

I urge you to test this out at home. Hold on, don’t test the failures, just prepare for them and understand your drone. As I’m sure you know, the center of gravity of your drone is the point on which the drone balances. Stick it on the tip of your finger and balance it. That’s your point.

Your center of thrust, as I’ve called it, is the very center point where lift created from the propellers is equal. The easy thing to do is draw a line in between all of your propellers. Not just around the outside of ‘the box’, all of them. In the case of a quadcopter, you should get a box with an X in the middle. (The crossing center point will only happen when you have an even number of propellers, you’ll need to brush up on trigonometry if you want to find the precise center of an odd numbered propeller diagram.)

Now that you have that, imagine a propeller failure, will your drone crash?