Swagtron was one of the first companies to popularize the infamous hoverboard, a 2-wheeled self-balancing scooter that allowed people to get around just a little bit faster by shifting their weight in different directions. While quite a few companies have picked up on the concept at this point, Swagtron has opted to expand their line of electric products, now offering a number of electric bikes, skateboards, and even surfboards.

Their premiere longboard however, is called the Swagtron Voyager, measuring in at 42″ long and packing dual 350W motors. The company says that these can go up to 15MPH, or 30 if you use the optional ‘ungoverned’ controller.

So how does the e-longboard stack up? Stick around to find out in our full Swagtron Voyager review. The body of the Swagtron Voyager is reminiscent of many traditional longboards, but with some integral design decisions that make it quite unique. Not as unique as the Solowheel Iota, but close. The board is far from symmetrical on both ends, curving from having the shortest width at the back end to widest near the front. There is a very prominent “Swagboard Voyager” logo on the deck, which can be a bit harsh for those that aren’t huge fans of the “Swag” branding the company portrays through its entire product stack.

Speaking of the deck, this thing is made of eight plies of wood, with two layers of bamboo sitting atop six layers of Canadian maplewood. The company says this combination makes the board sturdy but flexible, and I would have to agree here. When going over bumps and small branches in the road the board definitely showed a bit of flex, but only enough to traverse these obstacles without throwing me off.

The grip tape on top of the wood is very good, and actually ended up tearing up my clothes and hands a bit when I was carrying it. Either way, this is great for keeping the rider actually on top of the thing, so we’re not complaining too much. There is a handle on the back of the board which allows the user to tow it behind them when they are not in a position to be skating, and this came in so much more useful than I had originally anticipated. I mostly used the board to skate around town to various coffee shops and grocery stores, and you can’t exactly lock this thing up like a bike. While many skateboarders opt to strap their board to their bag at this point, electric skateboards are essentially all very very heavy, and this is not really an option in this case. The on/off button on this board is a small circular ring on the battery, which lights up blue when turned on, and stays compressed unless turned off. This makes it easy to tell if you left the board on, and is a great implementation in my opinion. The board uses oversized orange polyurethane wheels which it should help go over divots and cracks in the pavement. These are mounted atop fully customizable trucks that the user can change out to their liking in order to get their optimal turning experience. I thought these wheels worked just fine, and didn’t see a need to switch them out for any reason, but I am also not a native skateboarder, so your experience may vary. The Swagboard Voyager uses a custom 36V lithium-ion phosphate battery which the company says is safer and lasts longer than traditional lithium-ion batteries, and connects to dual 350-Watt motors to drive the unit. Swagboard does not list the exact capacity of the battery, but says you should be able to get 15 miles out of this thing, which is a bit more than I experienced. I would say I got about 9-10 miles out of one charge, but mileage will vary depending on your terrain and weight. The company rates the maximum weight capacity at 330lbs, but I did not test that myself for fear of damaging the battery – and we all know what a damaged battery can do.

The battery isn’t exactly thin, either. It juts out pretty significantly from the base of the board, and isn’t hidden very well against objects on the ground. You really shouldn’t be going over speed bumps with this thing, as you’ll probably damage the battery and likely be flying off in no time. I would have preferred either some better protection or a slightly smaller battery here, but that is up to personal opinion. There is a decent amount of acceleration present on this thing, but it was not as sharp as other models that we tested. Unless  you smash up on the controller, you should get a decently steady acceleration curve while riding the board. 15MPH definitely feels much faster on a skateboard than it does in a car, and I felt more comfortable riding at a brisk 5.5-6MPH in the bike lane or sidewalk. If you’re more experienced than me you may want to go a bit faster, but I really think 15MPH on a skateboard is pretty darn fast.

We tried out a VR skateboarding experience from Samsung last year, read about it on VRSource.

While the body on the Voyager provides a decent riding experience, I think it would be improved in a variety of ways. Other boards on the market have a more symmetrical body shape which allow for more room for your back foot, which I thought was rather lacking on this device. If you have your back leg too far near the end, it can be hard to get a solid grip and control your turning direction. Even at 42″ this board felt a bit cramped compared  to other options, and that is coming from an average height 5’10” male. The remote control for the Voyager is pretty wholly custom, coming in at a vague egg shape and using a thumbstick rotating on the x-axis to control acceleration. There are bumpers on the sides of the remote to protect it from falling, but when I fell off the board the first time it scratched up pretty badly on the bottom. While it didn’t break from this fall, I could see this happening fairly easily had I landed more directly on the remote instead of my tail bone.

Speaking of things that break when they fall: Could spinning be the secret to ‘safely’ crashing a drone?

The controller is made from plastic that while not incredibly thin, did not seem particularly thick, either, and I would have preferred something a bit more sturdy. 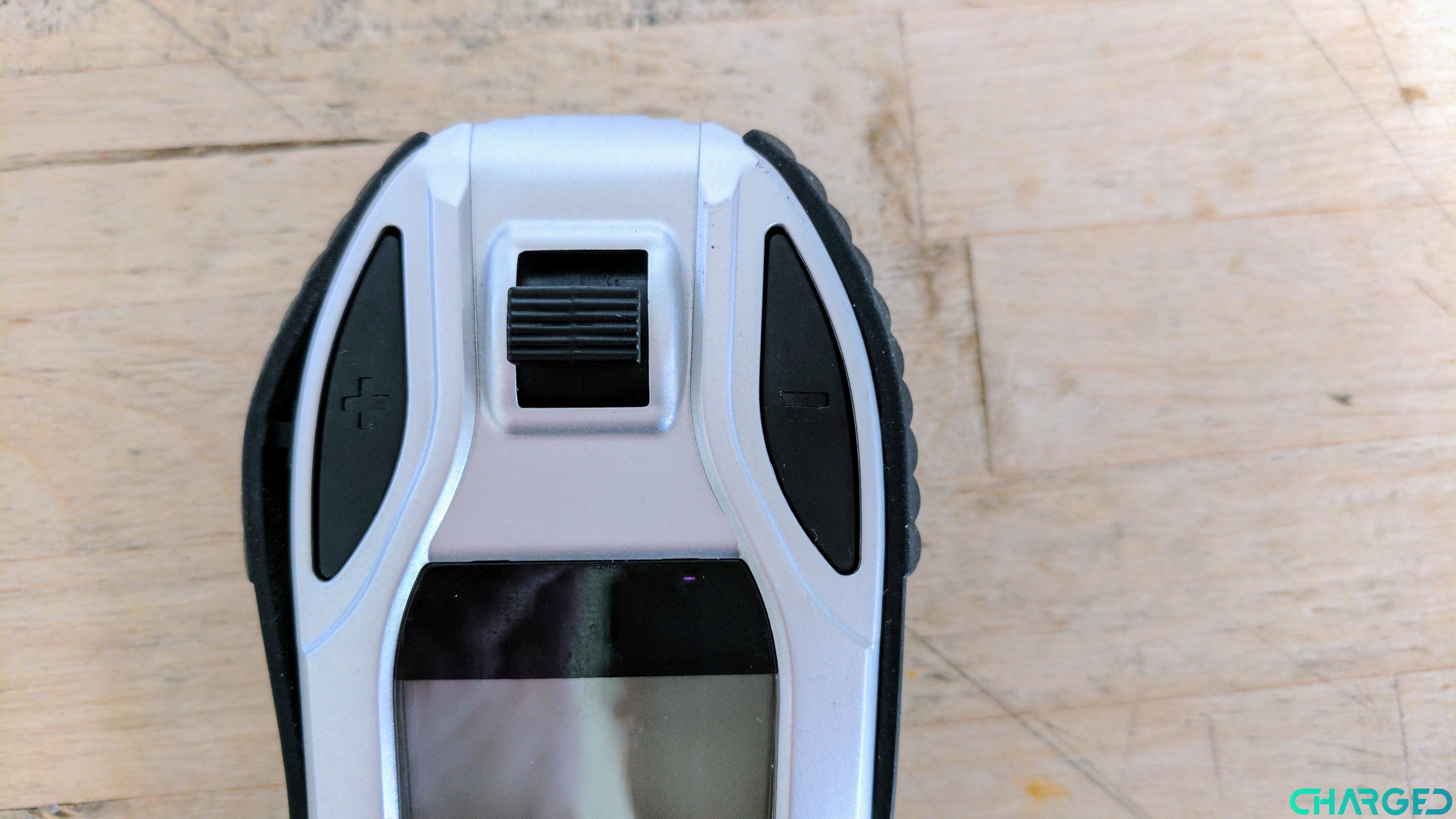 There are a couple of “+” and “–” buttons to the sides of the thumb stick that can accelerate you nearly instantly to preset speeds, and these can be adjusted to your liking fairly easily. The screen atop the device shows your current speed as well as the battery left in the board as well as the controller, which is pretty useful to know if you’re going to need to fill up soon. The accuracy of this may vary however, as I saw my board battery switching between 2 and 3 bars fairly often. It is still better to include this metric than omit it completely though, so we’re glad it’s here. There is also a wrist strap to keep the remote in your hand while you’re riding, but I feel like it might be better to drop the remote if you crash instead of landing directly on it. I get that you don’t want it to get lost in traffic, but really, it’s going to get smashed otherwise. It can be charged via a dedicated micro-USB port in the front, and uses a 350 mAh lithium-ion battery. I found the remote goes into sleep mode far too quickly if you haven’t adjusted  your riding speed in a set amount of time, and this is pretty frustrating. You can wake the remote quickly by pressing on either the + or – buttons, but this always made me worry that my speed was going to be rapidly increased or decreased on the fly. Luckily you’ll have to press these buttons again after waking for any effect to actually take place, but it would have been nice if the controller could be woken with the thumb stick instead.

Coming in at only $399, there is a lot to like about the Swagboard Voyager. If you’re trying to get into the e-longboard game on the cheap, this board is absolutely worth a look. Since many competing options come it at $1,000 and over, it’s going to be very difficult to find anything comparable in the price range. The board rides smoothly and has good range, but the body could be improved along with the battery frame. The controller is fairly cheap-feeling and has some odd quirks, but ends up being a pretty decent method of controlling the board.

With little to no noticeable latency, you shouldn’t have any trouble getting around your town a bit faster with the Swagtron Voyager under your feet. If we’ve sold you on this electric skateboard, you can grab it now for $399 on Amazon.